“Dog Whelks and Dyer’s Woad” is the title of the new exhibition at Haus der Seidenkultur (HdS). It presents the fascinating development of textile dyeing from the first dyeing experiments in the Neolithic Age through the historic dye workshop of the Middle Ages right up to the first synthetically produced dyes from the mid nineteenth century. The opening will be broadcast live in the Internet on Sunday, 23rd August.

The signal effect of skilfully combined colours is depicted in the exhibition logo where the dominant red from the dog whelk increasingly absorbs the blue from the dyer’s woad plant. In Germany indigo blue was extracted from dyer’s woad. “The pigment oxidizes when it comes into contact with the air and then gradually turns blue”, explains curator Dr. Ulrike Denter who worked in textile research for many years.

The exhibition focuses on applied dyeing techniques which emerged from the various occupation groups. These ranged from black dyers to linen und woollen cloth dyers right up to fine cloth dyers. As time went by, independent guilds arose from the different occupation groups, each with its own individual emblem bearing a specific motif.

Denter also highlights the dark side of this in the true sense of the word “dirty business”. The dyers themselves were often regarded as being unclean because they handled foul-smelling substances such as urine and cow manure.

Originally the dyers were paid workmen working for the cloth processing guilds and they were consequently subject to strict regulations. Denter: “Severe punishments were the consequence if the dyed fabric did not meet the quality requirements. Such punishments went as far as chopping off a hand.

A highlight of the exhibition is a fragment of a Coptic tunic, a “mummy shroud”, dating from the seventh century after Christ. Thanks to fortuitous circumstances the grave fragment was gifted to the museum in Luisenstrasse 15 where “Dog whelks and Dyer’s Woad” can be seen on Sunday, 23rd August from 13.00 hours.

The opening will be broadcast as live-stream in the Internet starting at 11.00 hours. “If only a few people can come to the museum due to Corona, then we go to the visitors”, says Dieter Brenner who is looking forward to the premiere of a live-stream broadcast sponsored by the Sparkasse Krefeld (savings bank).

Musical highlights well known from the HdS events of past years will be visible and audible during the opening. A pleasure which Frank Meyer, Mayor of Krefeld, does not want to miss. He will be present live at HdS.

The new temporary exhibition will be on show until 12th September 2021 during the normal opening hours of the museum from Wednesdays to Fridays from 15.00 to 18.00 hours and Sundays from 13.00 to 17.00 hours. You can register for the desired date of your visit under 02151-9345355 or per email under This email address is being protected from spambots. You need JavaScript enabled to view it. 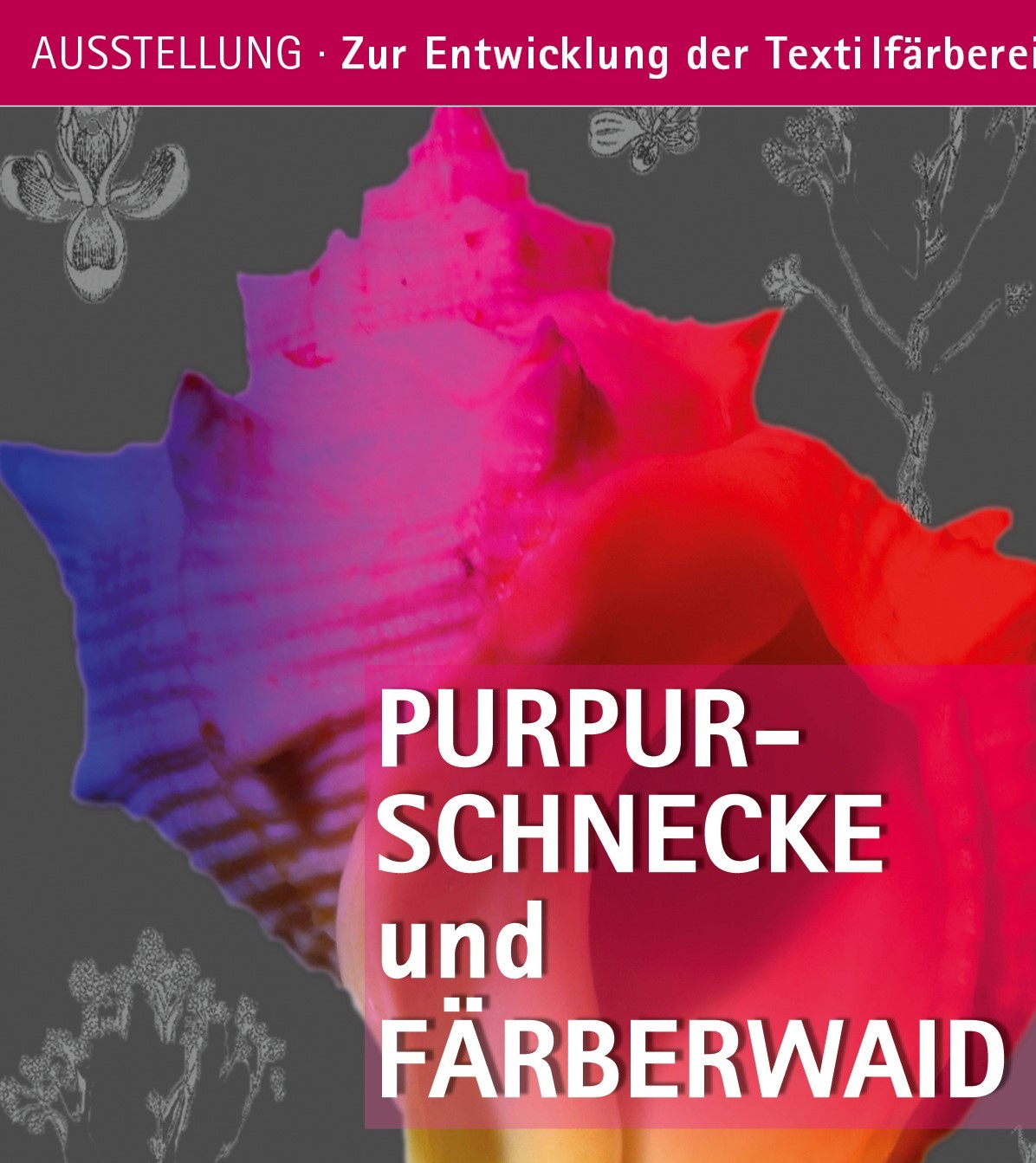 The exhibition logo depicts the red from the dog whelk in stark contrast to an indigo blue.
HdS-Graphics: Ilka Neumann

A display case has been set up in the Dyer’s Garden at Haus der Seidenkultur containing information about plants which were once needed to extract textile dyes.

The different dyers’ guilds each had their own emblem.