Krefeld in 3 D as it once was

For the festive decoration in the display window in the extension on the Neumarkt during the Advent period 1961, the Krefeld branch of the departmental store chain Kaufhof AG had 14 three-dimensional depictions of street scenes from Old Krefeld made by the employees responsible for window decoration.

These so-called dioramas which can now be seen at Haus der Seidenkultur were made of cardboard, plywood, fabric and paint based on models from the past with meticulous attention to detail. The perspective representation magically draws the gaze of the viewer to what is happening in the scene.

All the figures are affectionately designed, the buildings accurately reconstructed according to the documents from the town archives. “The attention to detail is astonishing,“ says Dr. Olaf Richter who as head of the town archives represented the town of Krefeld at the opening of the exhibition. And: “The exhibition serves as encouragement to delve deeper into the history of our town.”

Thanks to fortunate circumstances the unique exhibits did not sink into oblivion; Haus der Seidenkultur (HdS) so to say saved them from the rubbish heap and “revived” them in order to present them in a temporary exhibition entitled “Krefeld in 3D as it once was”.

During the preparations for the exhibition, curator Achim Wahl was literally faced with huge challenges. After all each diorama with outside dimensions of 1.53 metres wide and 1.58 metres high weighs some 50 kilos. In order to transport them from the basement of the Robert-Jungk comprehensive school in Krefeld-Hüls where the dioramas were being stored, Wahl had to design and build a special sliding carriage which he named “Pharaoh”.

The exhibits are in the meantime rather aged and will hardly survive renewed storage. Wahl: “They need to be expertly restored because not just the heads of the small figure have suffered over the past 58 years.” Therefore HdS is now looking for someone who is willing to take on the entire collection and restore it. (More about this soon)

Toma Neill, a well-known bandoneon player, who has perfectly mastered the instrument “Made in Krefeld” provided the music for the opening. Anyone who had previously regarded the instrument as a “Squeezbox from the Lower Rhine” was taught otherwise. Neill, amongst other things a guest musician with the orchestra “Neue Philharmonie Westfalen” enticed concertante sounds from the instrument. Chairman of the Association of Friends, Hansgeorg Hauser, was not the only one who had “never experienced or heard” such sounds from the bandoneon before.
The exhibition runs until 9th August 2020 during the normal opening hours of the museum Wednesday to Fridays from 15.00 to 18.00 hours and Sundays from 13.00 to 17.00 hours. Appointments for groups at other times can be made by mail under This email address is being protected from spambots. You need JavaScript enabled to view it.. 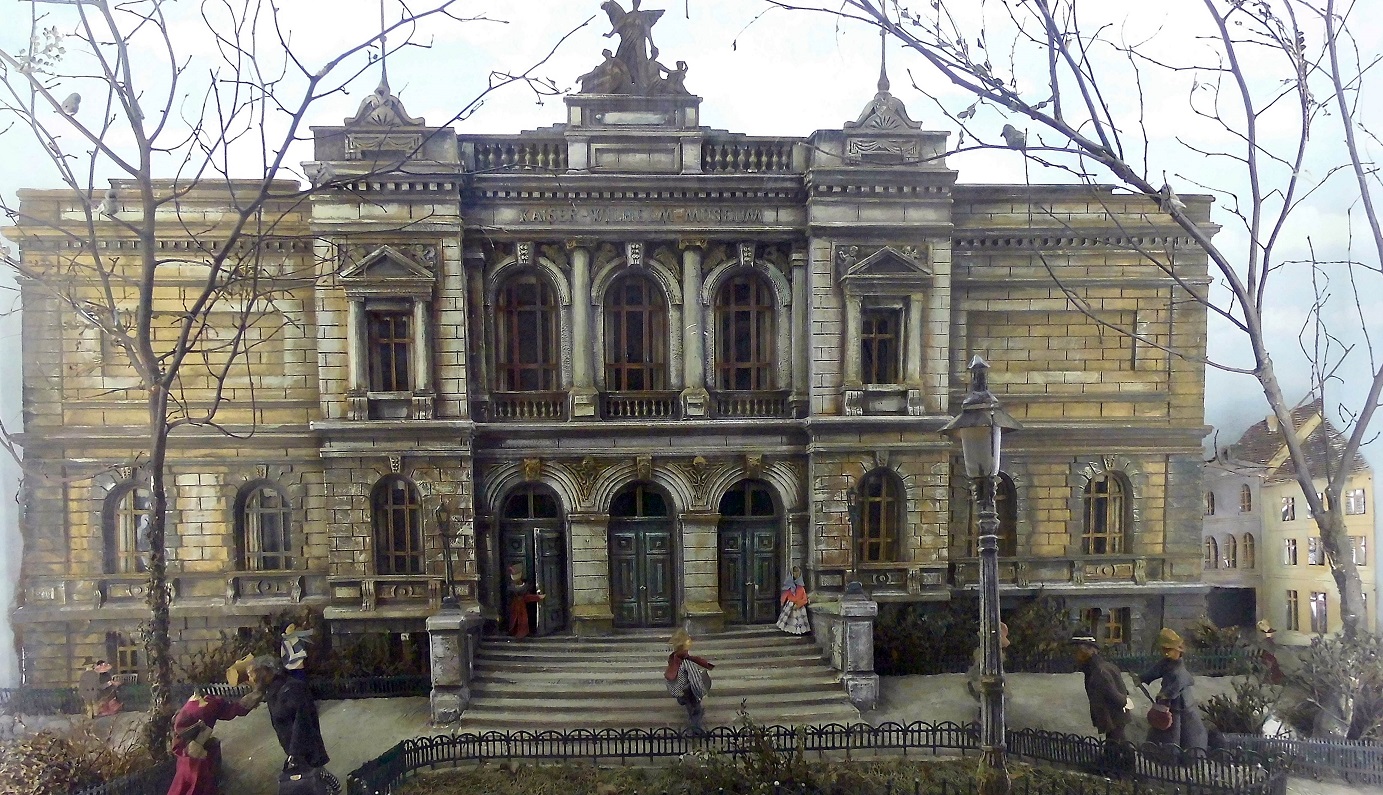 Krefeld in 3D: Naturally the Kaiser Wilhelm Museum may not be left out.
HdS-Fotos: Brenner 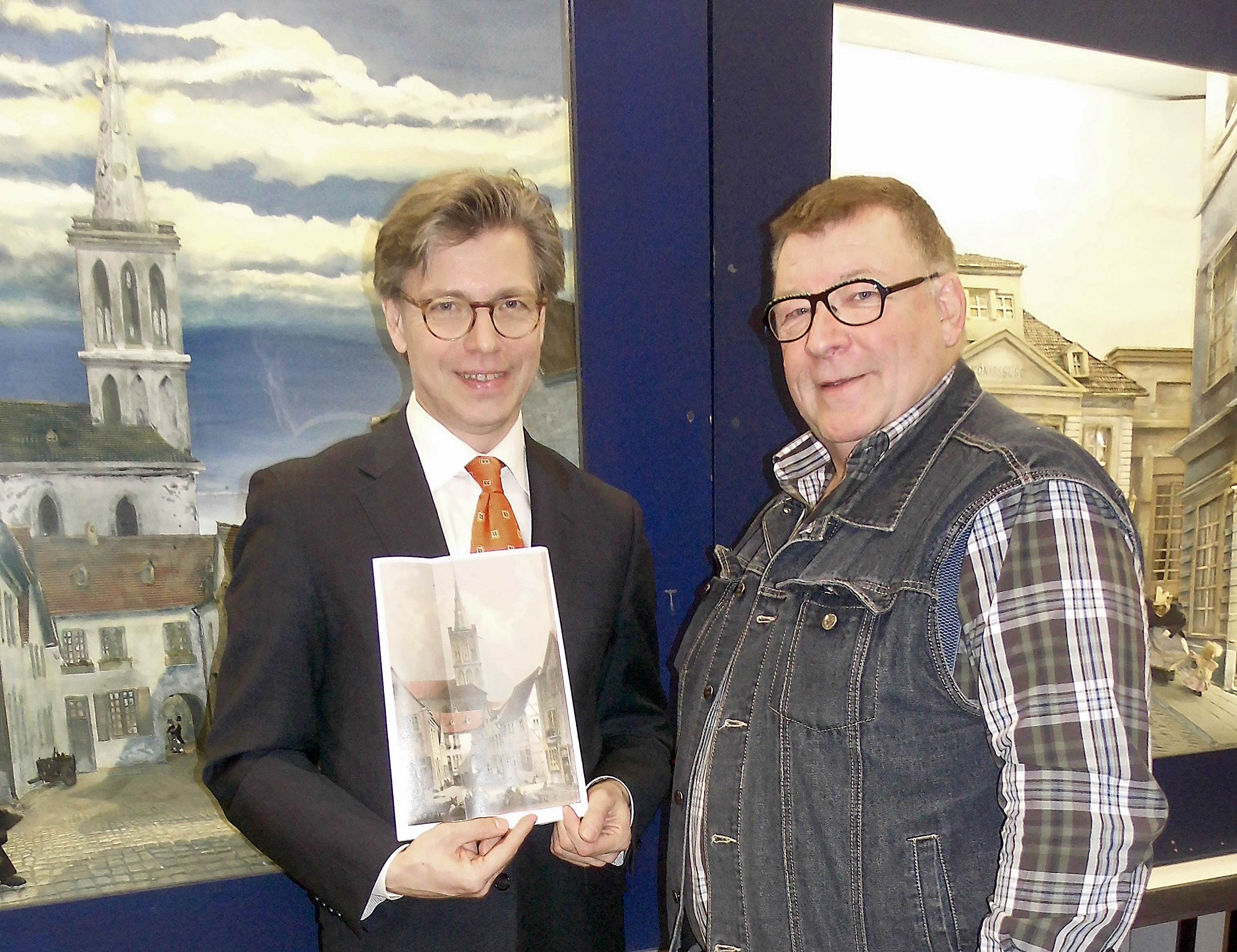 Curator Achim Wahl (right) together with the head of the town archives Dr. Olaf Richter, who indicates the plan according to which this 3-D picture was reconstructed. It depicts the Schwanenmarkt with a view of the Alte Kirche (Old Church)