The gondola pattern essentially combines two recurrent characteristic elements offset against one another. In the foreground it depicts a boat resembling a gondola being steered by a falcon with a bell. Passenger in the boat is a dog or a domesticated panther. This hunting scene is typical of Italian lampas fabric dating from the 14th and early 15th centuries. The gondola glides over spiral-like waves on which three ducks or swans are swimming. The background element is a pomegranate tree, the crown of which extends into a symmetric palmette. This pattern may refer to the legend of Torpes of Pisa who was an official in the service of Emperor Nero. During a ceremony in honour of the goddess Diana, Torpes declared that he believed in the one Christian God. Thereupon Emperor Nero had him tortured and beheaded. The corpse of the martyr and saint was placed in a rotten boat together with a dog and a cockerel and it drifted down the river Arno to the Tyrrhenian Sea. According to Provençal tradition Torpes‘ corpse was washed up on the French coast near to the place which was later to become St. Tropez , taking its name from St. Torpes. Today the gondola pattern provides the logo for the German Textile Museum in Krefeld. The museum owns a fragment of the original pattern repeat which has the inventory number 01981. We wish you much pleasure with your scarf or necktie. 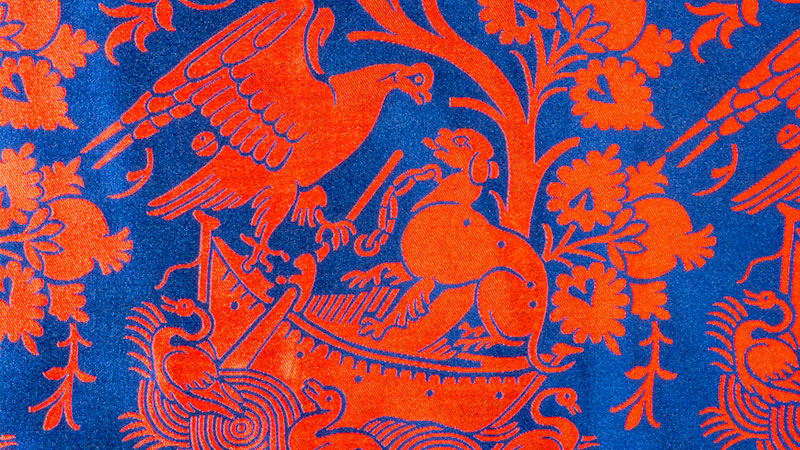