This is one of the designs produced by the Hubert Gotzes weaving factory for ecclesiastical textiles established in Krefeld in 1905. Here at the factory ecclesiastical vestments, that is to say priests’ robes, and other textiles for use in the church, were produced from precious silk cloth. Right up to the beginning of the 19th century, it was seldom that textiles were produced exclusively for the church. Robes were tailored from secular textiles but patterns were chosen which also had significance in the symbolic language of the Christian church. The circle is one of the oldest, if not the oldest symbol used by mankind. As early as the Neolithic period, ceremonial gathering places were arranged in circular shape (Stonehenge in southern England). Round cup marks are made in rocks. The solar disc and the full moon are the most striking circular objects in nature and people worshipped them like gods. In the 3rd and 4th centuries A.D., the cloth woven by the Copts in Egypt was decorated with a circular pattern. Silk cloth was also woven with this pattern in Persia. These textiles could well have served as the pattern for the textiles with large circular patterns which were laboriously woven from precious silk in the Byzantine Empire at the end of the first millennium. The circle symbolises perfection. It is the symbol for an ideal order. Integrity and balance. It has no beginning and no end (eternity). It is therefore particularly appropriate as a symbol of the divine which is why the Christian church has taken over this symbol for their liturgical textiles. This product is made of pure filament silk. The design is based exclusively on traditional, historic patterns. A few years ago this pattern was still being manually woven on these premises on wooden Jacquard hand-looms which were up to two hundred years old. Please do not wash it by hand but have it professionally cleaned. Through your purchase you are not just acquiring a stylish pure silk item. You are also helping to preserve our gem for future generations. We wish you a great deal of pleasure with your scarf or tie. 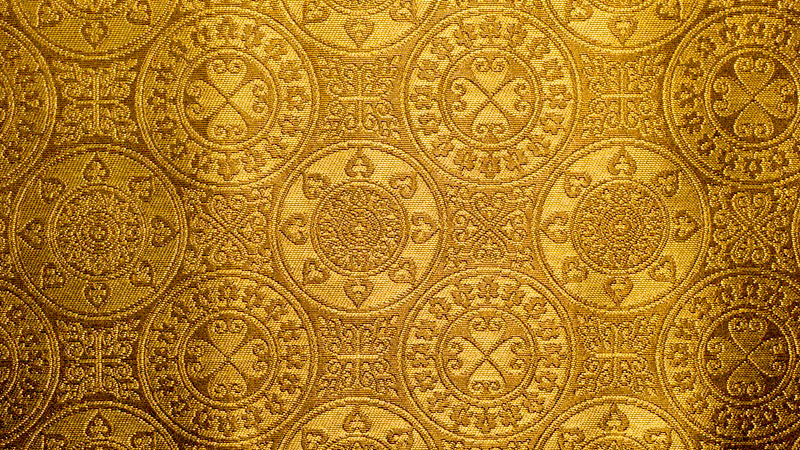