This is one of the designs produced by the Hubert Gotzes weaving factory for ecclesiastical textiles established in Krefeld in1905. It can still be seen on loom no. 6 in the weaving workshop today. Here at the factory ecclesiastical vestments, that is to say priests’ robes, and other textiles for use in the church, were produced from the precious silk cloth. Right up to the beginning of the 19th century, it was seldom that textiles were produced exclusively for the church. Robes were tailored from secular textiles but patterns were chosen which also had significance in the symbolic language of the Christian church. The paradise pattern is arranged symmetrically with pairs of birds of prey facing one another under a sun motif. The pairs of birds are each separated by an elaborately stylised palm tree, in whose fronds there is a nest. Therein grows a tree with a single flower in the centre and wide-spread branches under which there is a pair of swans facing one another. The pattern belongs to a group of textiles inspired by Chinese motifs which were produced in the 14th century in various centres for silk weaving in Italy such as Lucca, Venice and Florence. Despite the obvious heathen symbols, these patterns found their way into the symbolism of the church. The crescent moon was ignored and the bird was interpreted as an eagle. This, the most powerful bird in the sky, was equated with Christ, the sun regarded as the light of the enlightenment. The pair of swans represented constant faithfulness. Therefore it was possible to make ecclesiastical vestments and altar hangings from material bearing this pattern. In Krefeld, the pattern was produced exclusively as silk cloth based on the colour canon of the church, i.e. in the five colours red, white, black, green and purple, just as the historic model was. The pattern could also be woven tone in tone or in two colours by also using gold thread. This product is made of pure filament silk. The design is based exclusively on traditional, historic patterns. A few years ago this pattern was still being manually woven on these premises on wooden Jacquard hand-looms which were up to two hundred years old. Please do not wash it by hand but have it professionally cleaned. Through your purchase you are not just acquiring a stylish pure silk item. You are also helping to preserve our gem for future generations. We wish you a great deal of pleasure with your scarf or tie. 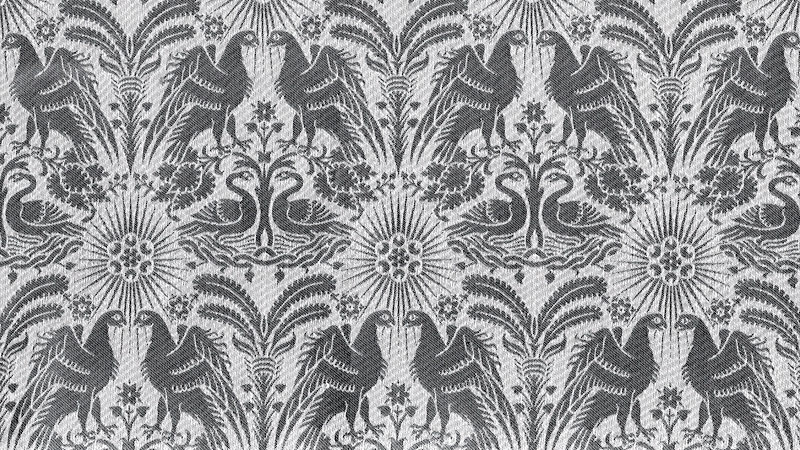