“Mobile Cinema” with Films about Krefeld open from now until Whitsun

The “mobile cinema” belonging to the “Covestro Foto-Film-Club Krefeld” planned to show nine films about the Town like Silk and Velvet in mid-April at Haus der Sei-denkultur (HdS). “And the show which is always sold out will still take place despite the Corona crisis”, says press spokesperson Dieter Brenner. However: “Not in our museum. The show will be presented instead on an Internet site which has been especially set up involving considerable technical effort.” “Bookings for the show are therefore no longer necessary; the curtain will be raised for all those who want to participate in the film evening from now until Whitsun.”

The viewer can look forward to a diverse mix of cheerful short films, scenes from the museum and two documentaries about events in Krefeld. “And the films will not merely be shown but also introduced with a personal note” says Brenner. Viewers should feel as if they are participating live and in colour in the “Silk and Velvet Round Circle” evening.

For example, Wolfgang Volker from the Film Club announces initially “Film Confet-ti”: A montage of short scenes from various films relating to different topics made by Film Club members.
The recordings for the film “silk-o-phonics” were made by Manfred Weisters at HdS. For the Westdeutsches Fernsehen (television), the museum provided the ideal set-ting for the search for the best choirs in North Rhine Westphalia. In the film “A Dog’s Life” Gisela Plette has captured her relationship with her dog, Falko, who is now a star despite his age.

“Films which tell a short story in less than one minute need to have special charm”, says Volker, awakening interest for “The Second Man”. The film about the produc-tion of a silk necktie was made at the company Ascot. Here a female outworker demonstrates her dexterity.

“Have you ever experienced a talking sunflower?” Lothar Lindner answers this question with a definite “yes“. He has after all eavesdropped on such a splendid ex-ample with his film camera. “To hang by a silken thread is one of the many sayings in everyday language which originates from the textile sector. Rosemarie Viehweg-Weber, a personality from the Krefeld Town Theatre, looked into this and promised not to “foist anything on us”.

The film “Back in Krefeld” is dedicated to the bandoneon. This instrument was de-veloped in Krefeld more than 150 years ago and has in the meantime conquered the world. “This unique documentary was made possible with the support of the Kre-feld Culture Office and the bandoneon artist“, says Volker.

The show finishes with the film “Town Walk on the Silk Route”. Town guide, Dieter Brenner, walks around the town with Meister Ponzelar and his doffer boy, stopping at the historic places relevant to the textile industry. Pastor Christoph Wiebe relates the history of the Mennonites. Thanks to the craftsmanship skills of this faith com-munity the state of Prussia developed from being an insignificant “field of crows” (that is where the name Krefeld originates) into the richest town in the state. This film is available from the HdS online-shop in HD quality, price EUR 15.
And here is the entrance ticket for the “mobile cinema”, which will remain open from now until Whitsun. Just click on the following link in the Internet and the curtain will rise.
https://covestro-ffc-krefeld.de/wanderkino/ 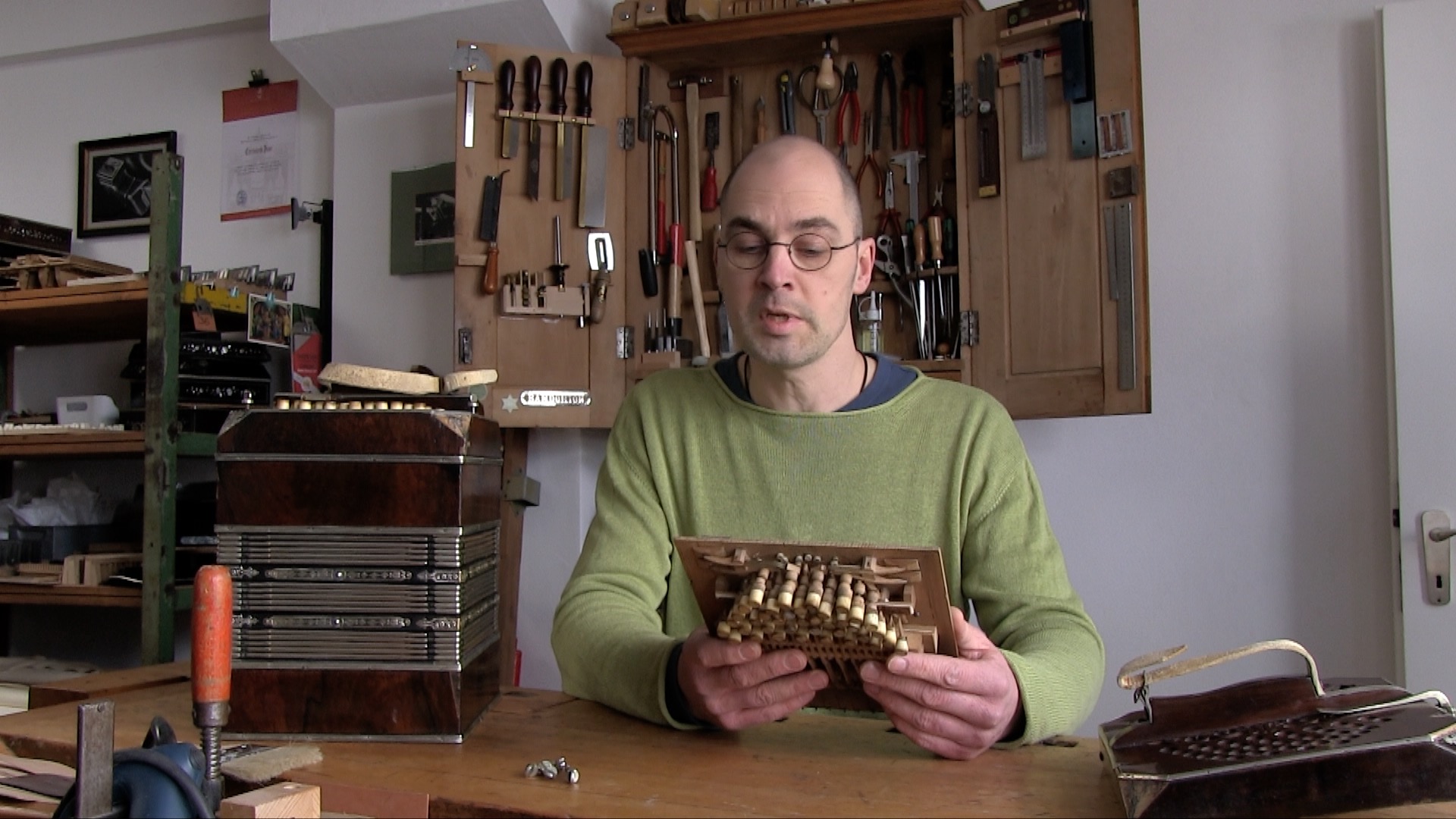 Christoph Paas runs a restoration workshop for bandoneons in Cologne 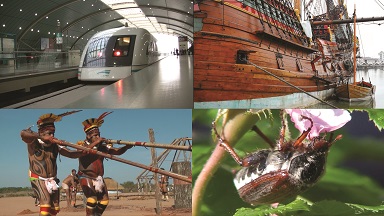 A short excerpt from the many film topics in the Confetti Film.

In the film, HdS has reduced the two-hour “Town Walk on the Silk Route” to 20 minutes. On the right, Meister Ponzelar, who climbs down from the monument in the figure of Klaus Drenk and heads for the places of historic interest in Krefeld with his doffer boy, Elias. .