The “Mobile Cinema” which the Krefeld-based “Covestro-Foto-Filmclub” in cooperation with Haus der Seidenkultur (HdS) opened in the internet during the Whitsun period is now presenting more treasures from Krefeld. “Our premiere was a complete success“, says HdS spokesperson Dieter Brenner who now announces the programme change offering six new films.

Initiated to make the best of things during the Corona period, the “mobile cinema” was initially intended as a virtual substitute for the annual film evening in the museum which is always sold out. Brenner: “As the saying goes, if visitors cannot come to us, then we come to the visitors”. The high audience rating measured on the basis of the number of clicks has encouraged the organisers to continue with the project.

And therefore the “curtain” rises once again for more films moderated by film club member Wolfgang Volker. The audience can look forward to an amusing short film, film scenes from HdS and four documentaries showing events in Krefeld and the Lower Rhine area.

Gerd Dikta from Grefrath has captured impressions from Haus der Seidenkultur with his camera. He links the priests’ vestments which were once woven in the Paramentenweberei Hubert Gotzes (now HdS) to the silk culture of the Chinese Miao population.

The “Federal Hunting Horn Player Competition” is presented in the film taken at the foot of Burg Linn in 2018 by the Krefeld-born Heidulf Schulze. He called his 12-minute contribution “Defence of the Title”. “50 Watt for a garden” is the title of the film made by Wolfgang Volker from Viersen who kept a (camera) eye on a water garden one entire summer long.

The short film by Lothar Lindner from Kempen entitled “A little housework” promises to be amusing. Next comes “Stony stories”, in which the Krefeld-born Klaus von de Gracht describes the “Kempener Grenzsteinweg” (Kempen Boundary Stone Way) along which 100 historic boundary stones serve as a reminder of the constantly changing history of the region.

The “Gold of the Lower Rhine“ is a joint work of the Covestro Foto-Film-Club members who in 2014 made an 18-minute long documentary about gravel and sand extraction and the re-naturalisation of the resultant expanses of water.

“If you click on the following link to the internet you will have chosen a very special cinema visit“ say HdS and the film club, inviting you to watch the new films in the “mobile cinema“.
Here is your entrance ticket:

New films from Krefeld and the Lower Rhine area are being presented in the “mobile cinema”.

Impressions from Haus der Seidenkultur where once priests’ vestments were produced for the Catholic Church. 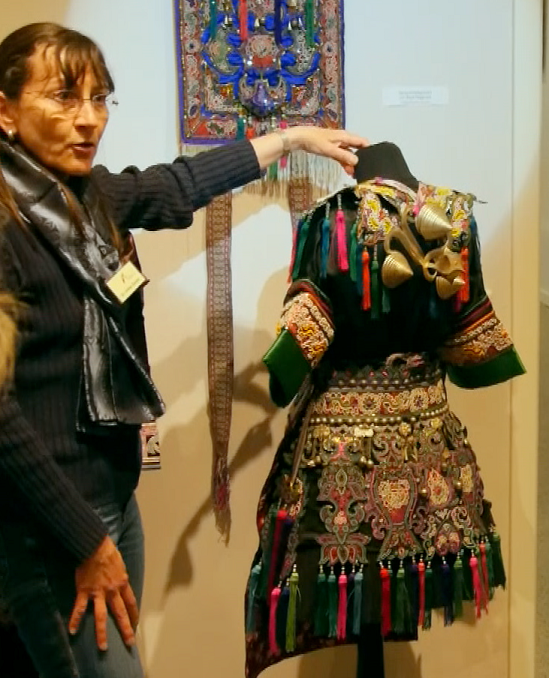 One of the films in the “mobile cinema” reflects on the exhibition in which HdS focussed on the silk culture of the Chinese Miao population.