“Non-violence requires far more courage than violence!” That is the quintessence of the season’s greetings which the museum chairman Hansgeorg Hauser sends to the Friends of Haus der Seidenkultur each year. Hauser’s Christmas dream begins with the words: “If I dream of a world full of kind people I may seem to be naïve, a person of Utopia. Nevertheless I want to continue dreaming in the face of all nightmares full of violence.”

Hauser‘s remarks were inspired by Phil Bosmans and his book “Liebe wirkt täglich Wunder” (Love performs miracles every day). During his lifetime, the native Flemish author gained a reputation as a Catholic priest and Telephone Samaritan. Against this background he became acutely aware on several occasions that “Evil evokes evil“ and “violence generates violence”.

Hauser takes up this central theme and remarks on it in his Season’s Greetings: “An insult must obviously be revenged. One wrong follows another. Everything should be resolved through justification. The one who carried out the first blow is singled out, not to be forgiven but to be beaten in return. Suddenly a person appeared in the history of man who took a completely new path. The path of forgiveness.

Each generation faces the choice: violence or non-violence! Forgiveness or revenge! Many others followed Jesus: Mahatma Gandhi, Maximilian Kolbe, Martin Luther King, Dietrich Bonhoeffer and many whose name is not known. Non-violence requires far more courage than violence. Non-violence depends largely on what is regarded as evil. Those who only see evil in systems and structures and in other people make a fundamental reasoning error.

Evil sits far deeper: in the heart of people, there where the other person overlooks it and ignores it where the other person despises and hates it and finally liquidates it. The tactic of non-violence is the tactic of love which grasps evil at the root. Combat evil without doing anyone any harm. Talk to one another and be regardful, respectful, helpful and forgive one another.”

Finally Hansgeorg Hauser together with his wife Ursula wishes all friends and patrons of Haus der Seidenkultur a meaningful Christmas and God’s blessing for a fulfilled life in 2022”. Both say “A sincere thank you for everything which our joint efforts have benefited!“ 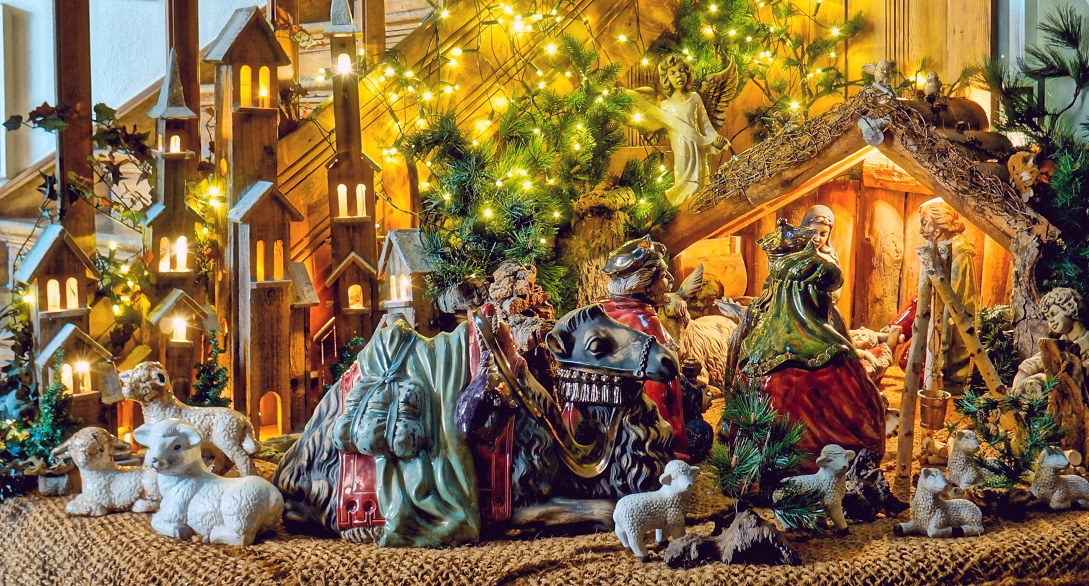 This very special and unique crib was discovered by our photographer Christian van Doorn in a house in the Friedrich-Ebert-Straße in Krefeld. Th HdS Internet-Team wishes all visitors to our websites a Happy Christmas and All the Best for the New Year.