WZ article "Avatar will soon guide you through the Silk House"

"An avatar will soon guide you through the "Silk Museum" is the title of the WZ in its March 16, 2022 issue on the "Culture in Krefeld" page. Head of Culture Christian Oscar Gazsi Laki states: "The House of Silk Culture is getting fit for the digital future". The positive echo of the contribution, which deals with the "Mingei" EU project, also comes from abroad, where the people involved in the project are looking attentively to Krefeld, where the finale of the measure mentioned is due soon. The half-page article brings the reader up to date; one more reason to publish the article here in unabridged form:

It might come as a bit of a surprise – or maybe not – that a relatively small, privately run museum in Krefeld is one of the busiest digitally in the city. And that doesn't just mean the already attractive website of the House of Silk Culture Krefeld in the former Hubert Gotzes parament weaving mill. A professional-looking and informative website is actually a minimum for a museum today, no matter what kind. Although there may still be room for improvement in one place or another in other museums, but that is another long story in a very broad field. It is also still quite “normal” that despite the likeable “handmade” atmosphere in the building itself and also on the videos, exhibition openings are regularly streamed (also available on YouTube afterwards).

It gets spectacular when you hear terms like avatar, digitization and the like from Dieter Brenner. Incidentally, the lively good spirit in the house likes to jokingly refer to himself as a "swashbuckler" in reference to the craft of the "patroneur", who made templates for fabrics. And the charisma of this elderly gentleman, who passionately guides you through the secrets of the Silk Museum and inspires people for the traditional craftsmanship of silk weaving, can also be experienced digitally in the future. This is possible through an EU project called "Mingei", in which the House of Silk Culture is allowed to participate and which aims to "digitize both the material and immaterial aspects of ancient crafts and to transfer the corresponding knowledge. This relates to the presentation, preservation and accessibility of the craft as a cultural heritage” – as can be read on the project website.

"Our museum should also be fun to discover in the future," affirms Brenner, who will be available as an "avatar" with his voice. For individual visitors there will soon be (around April) 20 tablets, with the help of which “the avatar” will guide you through the museum with Brenner's voice. At individual info points there is more information worth knowing in words and pictures. "We want to be attractive for the individual visitor" - says Brenner. The usual way to visit the house so far is in the form of booked groups that are guided through the rooms of the museum. Individual museum guests should "not be left out in the rain." 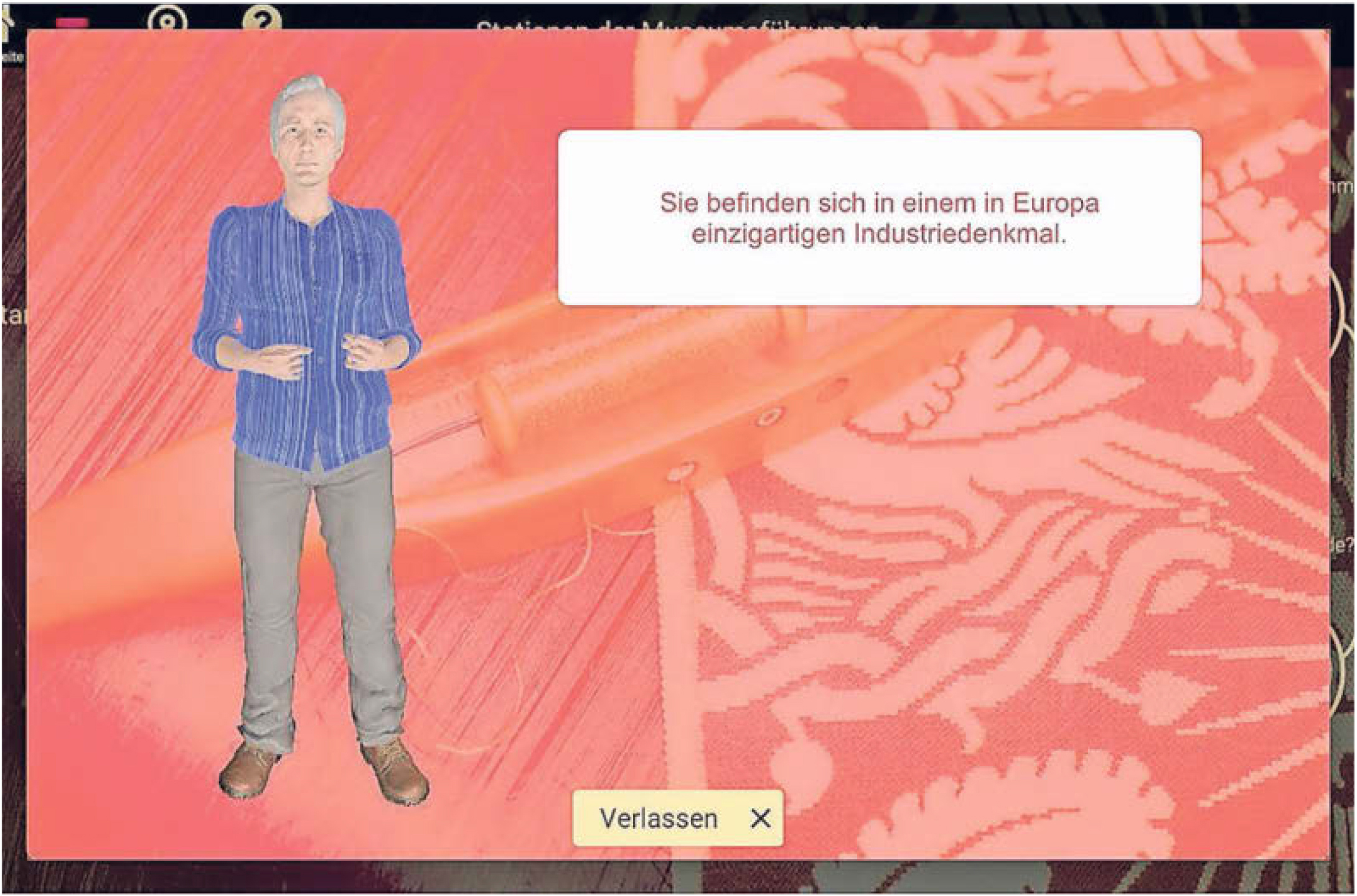 An avatar with Dieter Brenner's voice will soon guide individual visitors through the House of Silk Culture. Photo: Mingei-Projekt

An important step is the Mingei project as part of "Horizon 2020", which goes far beyond the avatar museum guide. Paraments, priestly robes, which were made in the weaving mill at Luisenstraße 15 at the time, are digitized, and the "history of silk" but also the "craft" are digitally documented. For example, the craft of patron Dieter Blatt was recorded for eternity by means of a "motion capture process" - i.e. a digitized recording of movements, as is otherwise used in Hollywood films to fill computer-generated figures with "life". The entire project is estimated at 102,000 euros, 85,000 euros have already been approved, reports Brenner. There are still a number of things that are on the museum's wish list, she admits - and that with voluntary museums, such as the House of Silk Culture, it is by no means trivial to fit into the EU's funding structures.

Museum also has many "analogue" plans for the future

But the House of Silk Culture also has numerous "analogue" plans. So one is in good spirits that there will be participation in the flax market again at Pentecost. With a plan A and a plan B, because if the presentation at the market cannot be successful due to corona reasons, at least a small version should be possible in-house. But Dieter Brenner also likes to talk about the house's plans for the city's anniversary in 2023. After all, it takes time to prepare - the city, by the way, is currently keeping a low profile, but promises to inform the public soon. "We have found a very interesting cooperation partner for the city's anniversary," enthuses Brenner. The old sewage treatment plant and the really hard-working monument protectors from the association for the preservation of the historic sewage treatment plant in Krefeld Uerdingen. Several projects are planned with the association. A large exhibition, for example, with the artist Sonja Weber, who will show large-format works with a textile reference. Smaller exhibits are to be shown in parallel in the Silk Museum. A fashion show is also being planned to take place at the sewage treatment plant - but that is still in preparation.