This pattern belongs to the historic Hubert Gotzes weaving company. The appropriate point paper design is kept in the archives. It goes back to the famous “Elephant Cloth” from the shine of Charlemagne. The original material is regarded as being one of the most impressive examples of artistic silk weaving at the time. Produced in the Byzantine Empire – probably for the emperor’s court there, it is thought that the original cloth arrive in the Occident as a gift. An imperial gift because the elephant as one of the strongest animals on earth symbolises the ruler. When the German Emperor Otto III had Charlemagne’s tomb in Aix-la-Chapelle opened in the year 1000, he wrapped the mortal remains of his predecessor in the magnificent cloth. That is how the precious silk cloth has endured the centuries. When the shrine was opened again several times in the 19th and 20th centuries, the impressive pattern was recorded at first in a drawing and later photographed. That is also how it reached Krefeld. Whilst the original motif is some 80 cm in diameter, the variation produced at the beginning of the 20th century is just under 30 cm. The configuration of the motif with the elephant in a circle is also new. In the original, the elephants are standing opposite one another and in strict rows one above the other. Another 20th century variant depicts the elephants in rows but the direction in which they face alternates, in one row the elephants look to the left and in the next to the right. The version which the Haus der Seidenkultur/the historic Hubert Gotzes weaving factory for ecclesiastical vestments brought out in 2004 shows a different possible motif configuration. A further version was brought out in 2008. This product is made of pure filament silk. The design is based exclusively on traditional, historic patterns. A few years ago this pattern was still being manually woven on these premises on wooden Jacquard hand-looms which were up to two hundred years old. Please do not wash it by hand but have it professionally cleaned. Through your purchase you are not just acquiring a stylish pure silk item. You are also helping to preserve our gem for future generations. We wish you a great deal of pleasure with your scarf or tie. 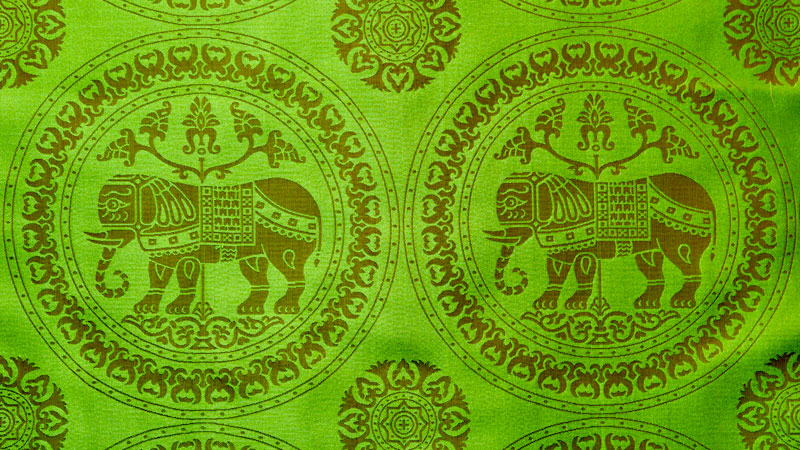